"In order that the true meaning of things may not strike the goyim before the proper time, we shall mask it under the alleged ardent desire to serve the working classes..."

I was one for most of my life. "Championing the oppressed" was a pathetic way to justify my life and meet women while being blinded to the real enemy. As a liberal, I believed we stood for "the public good" while everyone else was for mindless, selfish greed. Bella Dodd and The Protocols of Zion tell a different story.

As I will demonstrate, liberals, funded by the Rockefellers and Rothschilds (Soros) etc., are unwitting pawns of a satanic Communist agenda. They are dupes, like the lower Blue Degrees of Freemasonry. This sounds extreme but unfortunately, it is literally true.

In testimony to HUAC in 1953, she revealed some Liberals "have allowed themselves to become supporters of the very members of this conspiracy. This is not liberalism, not liberalism in the finest sense of the word. This is just allowing the Communist to pull them into a propaganda environment which says that "anyone who is close to the Communist is a liberal. I do not believe that is the definition of "a liberal."

Mr. Kuzig: "So you would say that when so-called liberals today, self-denominated liberals, support and work with the Communist program, they are being deluded into thinking they are helping a liberal cause when it is not liberal." 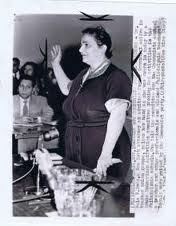 Dodd: "One of the great tragedies today is that these Americans do not realize that this would take civilization back to a barbarism which existed long before the Christian era... The Communists have a way of changing names and labels....How shall we recognize them, then ? ...by the fact that they believe that there is no God ; that a person is just born, grows, dies, decays, and that is the end. They believe that the individual doesn't matter; that the collective matters. They believe that certain people should have the power to run a country."

THE PROTOCOLS OF ZION

The Protocols of Zion make it clear that the Illuminati bankers promoted liberalism and equality only to overthrow the gentile aristocracy and church. "While preaching liberalism to the goy we at the same time keep our own people and our agents in a state of unquestioning submission." (15)

"In order to annihilate the institutions of the goyim ... we have replaced [their mechanism] by the chaotic license of liberalism. We have got our hands into the administration of the law, into the conduct of elections, into the press, into liberty of the person, but principally into education and training as being the cornerstones of a free existence." (9)

Their control is based on the paralysis they induce in representative government. "We replaced the ruler with a caricature of a government--by a President taken from the mob, from the midst of our puppet creatures or slaves. This was the foundation of the mine which we have laid under the GOY peoples..." (10) 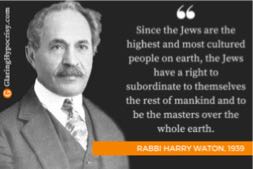 Through their control of the press and education, they lionized "sedition mongers" which in turn has protected them. "This advertisement has increased the contingent of liberals and has brought thousands of GOYIM into the ranks of our livestock cattle." (19)

As for equality, the founders of Communism write:" Far back in ancient times we were the first to cry among the masses of the people the words "Liberty, Equality, Fraternity," ..."baits" [which] carried away the well-being of the world, true freedom of the individual, formerly so well guarded against the pressure of the mob."

"The would-be wise men of the goyim, the intellectuals...did not see that in nature there is no equality, there cannot be freedom: that Nature herself has established inequality of minds, of characters, and capacities,... it was based upon these things that dynastic rule rested: the father passed on to the son a knowledge of the course of political affairs in such wise that none should know it but members of the dynasty and none could betray it to the governed. As time went on, the meaning of the dynastic transference of the true position of affairs in the political was lost, and this aided the success of our cause." (1-25)

As well as controlling society, the Rothschild banking syndicate uses the Left to extort and undermine the competition. During the French Revolution, the Rothschild mansion was spared by the rioting masses. The Bolsheviks were instructed to appropriate Russian factories and hand them over to the bankers.

We are all liberals in the classical sense of believing in individual freedom. But the Illuminati bankers have changed the definition of liberal to the spurious notion of championing the underdog. This has been used to divert, divide and undermine the majority, and subject the individual to the collective will which they define. 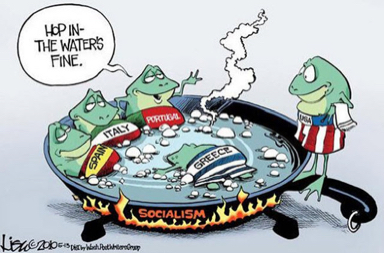 Until liberals wake up to what the Protocols refer to as "the true nature of things," they will continue to embrace their own destruction and that of Western civilization.

A cancer infects mankind. Central bankers who control the economy belong to a Cabalist Satanic cult called the Illuminati. It originated in the Sabbatean-Frankist Jewish heresy of 17th and 18th Century Europe. This occult movement is behind the "Enlightenment, "revolution," "secularism" and "modernity."  It is behind socialism, feminism, zionism, communism and fascism.

The Illuminati control government, education and media by subtle networks like Freemasonry and intelligence agencies. They use these levers to degrade humanity to be cattle and serve them and their god, Lucifer, in a "New World Order." Mankind is on the receiving end of their hate, the victim of a cruel hoax of cosmic proportions.

Comments for " Liberals -- Unwitting Shills for Communism and Satanism"

Some thought and a bit of correction.

1. You are too young to know - since the media was universal in lying about this, making it semi official by default - but the U.S. house committee to which you refer was NOT titled "HUAC" or House Unamerican Activities Committee. I had to make this same correction for many of those at Liberty Lobby some years ago.

The proper and official name of the committee was The House Committee on Unamerican Activities, the HCUA. You can readily see why the lying media constantly slurred it with the improper name you were subjected to. Just another misuse of the language - the real battle for the mind - as a tactic for their advantage.

2. Also in the word game, I would love to see right thinking people all stop using the word "capitalism" in a positive sense. When they do this they are really thinking of free enterprise, which is 180 degrees opposite of monopoly capitalism. You now have to find dictionaries about 100 years old to find the true definition of capitalism, which is, as its name clearly indicates, "the concentration of capital into the hands of a few." Ergo, "Monopoly capitalism" is a redundancy. ALL capitalism amounts to monopoly. That evil is what we have presently as the immediate cause of the economic dilemma in the world in the form of privately created medium of exchange as private debt owed to the few bankers of issue.

Free enterprise, to the contrary, indicates a huge middle class created by locally owned and operated businesses taking care of local needs, wherein most are financially comfortable, few dirt poor, and even fewer filthy rich - with few, if any, gigantic private piles of wealth.

Free enterprise cannot exist with our present capitalistic privately owned medium of exchange. Those who are favored by the bankers of issue will get loans, thus the existence of huge globalist combines, franchises, mall chains, etc. which easily freeze out and destroy local businesses, which find they can never get truly competitive finance.

Capitalism in NOT the opposite of socialism, free enterprise is. None of the other "isms" can exist beyond coffee house rabble rousing without capital financing them. Therefore, socialism - in all its variants - is just another handmaiden of capitalism, as was the Soviet Union and as is Red China, the United States and practically all other "western nations.

In fact, the Muslim nations may be the only nations left on earth which are NOT controlled through capitalism and we already know that at least some of the more radical Muslim sects ARE western world, i.e. capitalist, creations.

3. Still in the word game, the word "liberal" as used today often is used as a euphemism for the word "license," in the worse sense of that word's meanings. For too many of today's miseducated masses, "freedom" means doing exactly what the individual feels like doing with no concern for the effect of an act on those in the immediate sphere of any result, or on the world in general. The whole world of queers and lesbians can be defined by this statement. There is nothing whatsoever natural or necessary about their filthy learned (not inborn) perversions which are excused as a mental disease being coughed into the world. It also fits the feminist blight. A pox on all of them.

In this war let's use plain words with power in them. They make a good contrast to the enemy's weasel "sneak" misuses of words which are usually labeled "politically correct." You cannot modify the word "correct" without making the word the opposite of correct. The term "politically correct" has no choice but to mean that whatever is referred to is incorrect for purposes of a political agenda. Plain and simple.

Your site is, overall, an excellent example of the proper use of powerful words.

I mean, how could you even think of the term acquaintance without thinking of "rape?"