The Lost Art of Femininity 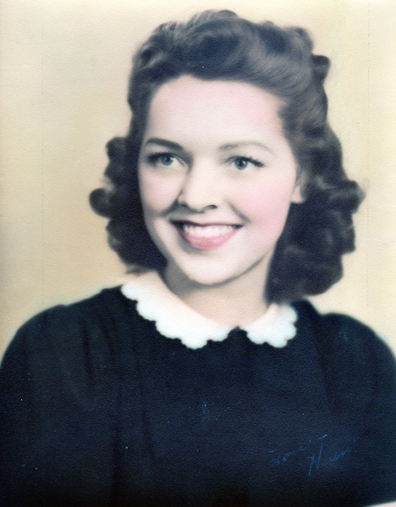 Helen Andelin, 21 in 1941 -Beautiful women are a dime a dozen but feminine women are extremelyrare.

Femininity is a gentle tender quality found in a woman's appearance, manner and nature. A feminine woman gives the impression of softness and delicateness. She has a spirit of sweet submission and a dependency on men for their care and protection. Nothing about her appears masculine, no male aggressiveness, competence, efficiency, fearlessness, strength, or the ability to kill her own snakes." Helen Andelin, Fascinating Womanhood p. 247

Femininity is based on a woman making husband,

children and home her first priority.

Her self sacrifice is the way that love comes into the world.

So the Satanists taught women to seek fulfilment in careers instead.

"By cultivating in all a sense of self-importance, we shall destroy among the goyim the importance of the family and its educational value...In this way, we shall create a blind mighty force which will never be in a position to move in any direction without the guidance of our agents..." (Protocol 10-5)

I am becoming more conscious of psychological dislocation caused by the occult assault on gender and the nuclear family.  Masculine and feminine energy complement each other. We naturally crave that essence which is best found in marriage and conjugal sex. Destroy masculine and feminine and you undermine this fundamental yin-yang. Society is simply oblivious to this pernicious attack by its traitorous elite.

Helen Andelin's book Fascinating Womanhood (1963) PDF is subversive to the New World Order because it upholds the inherent difference between the sexes and the basic laws governing marriage.

Such a book would never be published today. It is only available because it appeared 53 years ago and sold more than 2 million copies. If you have any doubt about your sexual identity, I recommend Fascinating Womanhood. It is pertinent to men as well as women. I also recommend Andelin's Fascinating Girl for single women and her husband's Man of Steel and Velvet for men.

I'm not saying you should treat this model as gospel or that it's for everyone. For eg., Andelin implies women should reward men with sex. That seems dated and I told her so in an email. My comment was met with a frosty silence!

Nevertheless, the book represents a timeless heterosexual paradigm that works. Every couple is different. Choose what is relevant to you and chuck the rest.

Femininity and masculinity are art like playing the piano. They must be learned. We have to know the basics before we can improvise.

People are very malleable. Society is the target of a long-term hate campaign designed to degrade and discredit heterosexuality. Domestic violence and rape are highlighted to make women fear men, reject femininity and become masculine. The destruction of the family has always been the goal of the financial elite in order to control people. (See "The Illuminati Program") I will elaborate below.

THE BASICS OF FEMININITY
Andelin says a woman's happiness depends on her husband's lifelong devotion and love. This book teaches women how to be attractive to men, how to be feminine. Andelin writes that women don't have to be beautiful to be feminine. "Acquire a feminine manner by accentuating the differences between yourself and men, not the similarities. Since the masculine manner is strong firm and heavy, yours should be gentle, delicate and light. Apply this in the way you walk, talk, use your hands and carry yourself." (256)

I can still remember how a girl I knew closed a kitchen cupboard with a motion of her hips. This happened 49 years ago when I was 20!

When Andelin writes that a feminine woman is never "crude, vulgar, harsh, overbearing or critical," it is apparent that the fair sex is being deliberately degraded and neutered by the media. "All your conversation should reflect tenderness, patience, forgiveness, tolerance and love."

A wife's first priority is her husband and then her children. Thus a single woman will consecrate herself for her future husband and children as much as possible. She will not be promiscuous.

Wives tend to put career, friends, parents, success and appearance before their husbands. "If you are a successful career woman, keep your priorities straight," Andelin writes. "Let your husband know by words and actions that he is number one." (95)

The woman's primary role is to be a wife, mother and homemaker. The man's role is to be a guide, protector and provider. This doesn't mean women can't have careers or men can't cook or change a diaper. 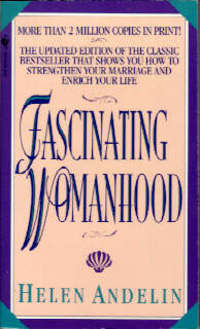 A man needs to feel that he is needed and that he excels his woman in his role. If she becomes independent, he may question his purpose and his feelings for her "since his romantic feelings partly arise from her need to be protected, sheltered and cared for." (102)

A woman should accept her husband at face-value and not try to change him. His pride and freedom are inviolable. She should focus on his good qualities and he will improve naturally in response to her.

Reactions to Andelin are either very positive or very negative. One minister wrote on Amazon:" I have given approximately 250 copies of this book to women I have counselled in the past 5 years. In this period of time, I have yet to see ANY of them NOT improve their marriage by working on what they bring to the marriage, as an individual and to the whole."

Many women find the book outdated and laughable. One contentious point is that Andelin advises wives to adopt childlike petulance when upset with their husband. A lot of women find this demeaning. But in practice, most men will respond positively when their authority is not directly challenged.

Andelin may be outdated at times but she has the basic principles right; it's up to us to adopt them.

Beautiful women are a dime a dozen but feminine women are extremely rare. The world suffers the loss of feminine spiritual qualities: trust, modesty, grace, innocence, serenity, tenderness, patience and love. This is behind the male obsession with pornographic sex. Men unconsciously seek femininity and love to balance them. The restless masculine spirit seeks a calm harbour.

Young women don't realize that men find purity and innocence very attractive. Conversely, they are repelled by tough, jaded, experienced women. The willingness of women today to be promiscuous often can be counterproductive.

THE MONSTROUS HOAX
Men and women are the victims of a cruel hoax. They are taught that sexual differences are "socially conditioned." Ironically this lie is the actual "social conditioning". Sexual differences are inborn. For example, males have ten times the level of testosterone as women, and this determines their willingness to take risks, etc. Sex roles express natural differences and form the spice of life. 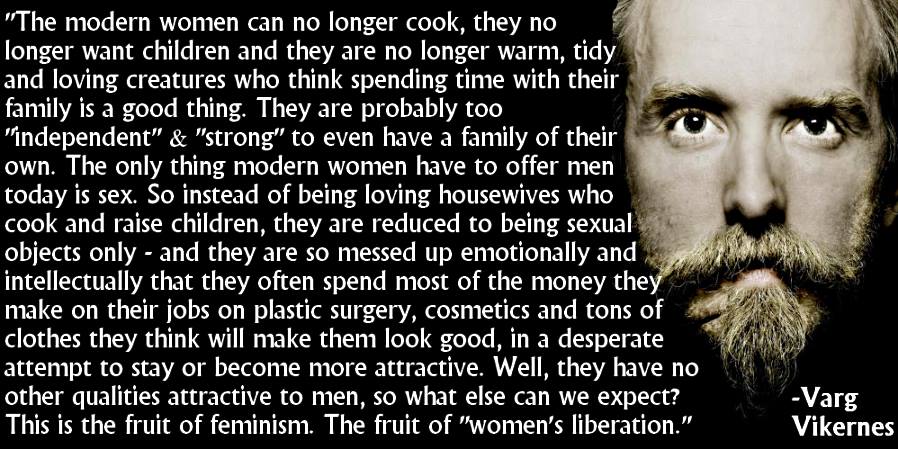 Feminism's Marxist principles of "equality" do not apply to loving heterosexual relationships and are in fact toxic. As I often say, heterosexual marriage is based on the exchange of female worldly power for male power expressed as love. Equal power neuters both sexes.

Our leaders are accomplices to this monstrous hoax. Behind them are the private central bankers who print our currency in the form of a debt to them. They need a world government so no country can default on it. They need a dictatorship so the people cannot end this scam. They need to stunt our natural development by fostering gender confusion so we can be controlled.

The elitists present women's liberation as if a cherished housewife were the same as a concentration camp inmate. They present this vicious psychological assault as "progress," when in fact it is subversion on a grand scale.

Ladies, where do you think feminism came from? It was organized by the US Communist Party, the CIA and the elite media, all instruments of the central bankers. It is funded by the Rockefeller Foundation.

This weekend yet another movie opens about a woman who is a violent killer. "Domino" is the story of a female bounty hunter. The real-life inspiration for this story Domino Harvey died recently of a drug overdose or murder. No wonder young women are confused! Where do they see wives and mothers presented in a positive light? Women are always harried, arguing with men and running off to work.

I get email from feminists who say my articles are "hurtful." It's eerie how they all use that word and repeat the party line. I think it's "hurtful" that the super rich want to take the place of God and nature and enslave humanity. But these feminists don't get it. They don't get "A"'s for connecting feminism with the Rockefellers, Sept. 11 and Iraq, i.e. NWO Central Banker Dictatorship.

Feminism is designed to make women feel unworthy for devoting their lives to the people they love. It forces them out of the house where their employers can control them. It forces infants into joyless daycares subject to conditioning and who-knows-what-else.

I would never stand between anyone and their idea of fulfilment. But ladies, don't be so gullible! You're being defrauded of a lifetime of love. Have your careers later but don't forfeit your femininity and your chance to have a family.

Makow - Men Must Champion Feminine Women (What is Feminine?)

Makow- It's OK to be a Woman!     and  Feminism Can be Cured (if Diagnosed Early)

Another review of Fascinating Womanhood 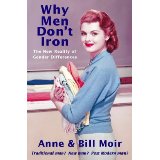 The loss of gentleness and sweetness among American-born womanhood is a glaring and terrible devolution for both sexes as they both lose out on the sublime love tapestry that was once woven by that tender feminine mystique of yesterday. While some may superficially appear beautiful, their eyes tell a different story. I almost never see American women, at least not white women, with soft eyes anymore; least of all among the young. Soft eyes betray a soft heart and there are few of them it seems. If you look at the eyes, voice, and body language of white females in American movies from the 1930s and 40s, for example, and then compare that to what you see in America today, it's like you've landed on a different planet.

Asian-born and even American-born Asian women still rank high, in my opinion, for feminine allure and sweetness, as do Muslim women I suspect. And many Hispanic women, thank God, manage to retain a feminine fire, but sadly, the greatest devolution seems to be among white American females, who are today so very, very different from that of their mother's mother. A soft, gentle girl is the product of a two-parent family home where the guidance of parents and daily tutelage in lessons of morality will forge the fairest garden for motherhood and marital bliss. I hope that woman will one day return to this land. We miss her.

In the professional setting, I am immersed in - women want to land a financially successful husband so they can precisely do this. Have children, make home a priority, and have an interested father to their kids. They have careers - but if the husband is wealthy enough, it becomes secondary to what they truly like to do - manage the home, social life, children, etc.

Having a career, education, and something to do outside of the home is important for a married woman, I truly believe this. But women themselves, I'm finding, only want this as a secondary compartment to their primary desire - children and a family.

But I believe the propaganda is only successful because men simply do not have financial means anymore to offer this. That's the real problem. Every "career-oriented" woman I know, and I know a lot, secretly ADORE the idea of being able to make home and family #1. You'll always have outliers, but for the majority of women, this holds.

You can find this article permanently at https://www.henrymakow.com/001189.html