[Editor's Note: The illegal administration of Indonesian-born, presidential usurper Barry Soetoro Jr., a.k.a. Barack Obama, will go down in history as one of the most fraudulent, corrupt, disloyal, and subversive administrations to ever blight the American political landscape. The shameful cadre of Marxist-socialist misfits he had appointed to the highest federal offices of law enforcement is remarkable in their allegiance to the utterly-corrupt, Soros-owned Democrat Party and their satanic NWO Judeo-Masonic overlords who are determined to grind America down into a multi-cultural, God-less, morality-free, border-less, third world worker's "paradise" much as the World Conquerors did to Czarist Russia in 1917 resulting in the annihilation of 60 million people. After gaining a reprieve with the Trump win, I wasn't surprised to see the infantile, foul-mouth histrionics in the streets from ignorant, mindless twits unable to provide any logical explanation for being against Trump other than to regurgitate their grotesque "F*** Trump" mantra. I'm not surprised to hear Israel Firster and dual Israeli citizen Sen. Charles Schumer hold up the Jeff Sessions confirmation as Trump's Attorney General. I expect those things from street dimwits and Zionist fifth columnists like Schumer because it's within their purview to behave that way. However, I didn't expect the Acting Attorney General of the United States, Sally Yates, a radical feminist ideologue in the mold of Elizabeth Warren, to defiantly countermand the President's direct Executive Order to her (as her boss) to stop admitting new arrivals from seven Muslim countries. Adopting a similar approach as the witless, anti-Trump street feminists, Yates decided to create a 15 second Legend for herself by delivering a "FU" to Trump through her insubordination. Way to go Ms Yates! I'm sure you'll be greatly admired in the coming years and feted by your tribal associates for your "courage" in giving the President the finger in your brief tenure as Acting AG. But like the Indonesian Usurper, however, your partisan "service" to the country will not be missed. And we're more than glad to see you go. ...Ken Adachi] 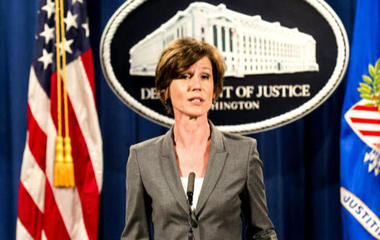 The White House said President Trump “relieved Ms. Yates of her duties” and named Dana Boente, U.S. Attorney for the Eastern District of Virginia, to serve as acting attorney general. The White House said he would serve “until Senator Jeff Sessions is finally confirmed by the Senate, where he is being wrongly held up by Democrat senators for strictly political reasons.”

“I am honored to serve President Trump in this role until Senator Sessions is confirmed,” Boente said in the statement. “I will defend and enforce the laws of our country to ensure that our people and our nation are protected.”

He then directed the Justice Department to defend Trump’s executive order on immigration and refugees.

Reporters and news photographers were not invited to witness the swearing-in ceremony.

The announcement about Yates’ firing and the new acting attorney general came shortly after Yates, a career official and Obama appointee, said she was “not convinced” Mr. Trump’s immigration order is “lawful” and that the Justice Department would not defend it in court “until I become convinced that it is appropriate to do so.”

The executive order banning new arrivals and refugees from seven Muslim-majority countries had already been challenged in court a number of times, and has sparked widespread protests in major cities. On Saturday, however, the Justice Department defended the order before a court in Brooklyn. Yates’ decision on Monday signified a major about-face by the department.

Before the White House released the statement on Yates, Mr. Trump lashed out on social media.

“The Democrats are delaying my cabinet picks for purely political reasons,” he tweeted Monday night. “They have nothing going but to obstruct. Now have an Obama A.G.”

Senate Minority Leader Chuck Schumer, of New York, issued a statement late Monday night saying the Yates firing “underscores how important it is to have an Attorney General who will stand up to the White House when they are violating the law. Many people have doubts about whether (attorney general nominee) Jeff Sessions can be that person, and the full Senate and the American people should at the very least know exactly how independent he plans to be before voting on him.

“The Attorney General should be loyal and pledge fidelity to the law, not the White House. The fact that this administration doesn’t understand that is chilling,” Schumer said.

On the Senate floor, he remarked, “She was fired because she would not enact, pursue the executive order on the belief that it was illegal, perhaps unconstitutional. It was a profile in courage.”

The top Democrat on the House Judiciary Committee, Rep. John Conyers, of Michigan, said in a statement, “President Trump has commenced a course of conduct that is Nixonian in its design and execution and threatens the long-vaunted independence of the Justice Department.”

The Senate Judiciary Committee is scheduled to meet Tuesday morning to vote on the nomination of the Alabama senator for attorney general. The vote was delayed a week during last Tuesday’s committee meeting when Senate Democrats asked for more time to consider the nomination, which is allowed by committee rules, CBS News’ John Nolen reports.

Following a vote by the committee the nomination goes to the full Senate for consideration. Although Senate Democrats don’t have the votes to block the nomination, they can use procedural maneuvers to draw the process out. The final vote by the full Senate on the Sessions nomination could come at the end of this week or the beginning of next week, depending on when Sen. Majority Leader Mitch McConnell schedules the vote and how long Democrats try to drag the process out. 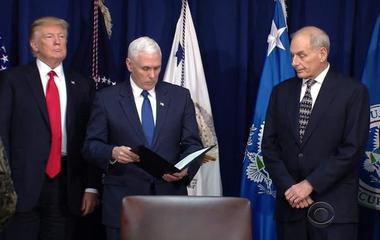 The Yates decision came as Trump pressed into his second week in office defending his sweeping immigration ban. Protests persisted at major airports, and concern mounted from U.S. diplomats and members of his own party.

Trump denied that his order was to blame for weekend chaos at the nation’s airports, instead pointing to computer glitches, demonstrations and even the “fake tears” of Senate Minority Leader Charles Schumer.

The president publicly shifted his focus, signing an executive action aimed at cutting regulations for small businesses and teasing his plans to unveil his Supreme Court pick Tuesday night. But the immigration ban remained at the forefront of his first fortnight in the White House -- and officials were pondering more actions moving forward.

According to a draft document obtained by The Associated Press, Trump is considering an executive order that would target some immigrants for deportation if they become dependent on government assistance.

The draft order calls for the identification and removal “as expeditiously as possible” of any foreigner who takes certain kinds of public welfare benefits. Such immigrants have been barred from the U.S. for the better part of a century and they can already be deported. The proposed order appears to signal a Trump administration effort to crack down on such welfare cases.

Another draft order under consideration would make changes to several of the government’s foreign worker visa programs. The White House did not immediately respond to requests for comments on the draft orders.

Why Yates Had to Go

It is a very simple proposition. Our Constitution vests all executive power — not some of it, all of it — in the president of the United States. Executive-branch officials do not have their own power. They are delegated by the president to execute his power. If they object to the president’s policies, their choice is clear: salute and enforce the president’s directives, or honorably resign. There is no third way. No one knows this better than high-ranking officials of the Department of Justice. That is why President Trump was right to fire Acting Attorney General Sally Yates. Over the weekend, President Trump issued an executive order temporarily restricting the admission into the United States of aliens from various Muslim-majority countries, as well as aliens from Syria and elsewhere who are claiming refugee status. Naturally, this has triggered protests by Democrats and the Left. They erroneously claim that Trump’s executive order violates the Constitution, statutory law, American tradition, and human decency. For inexplicable reasons, the new president left Yates in place to run the Justice Department in anticipation of the confirmation of Senator Jeff Sessions. A faithful Obama-appointed progressive, Yates obviously knew which way the political wind was blowing in her tribe. Like most Democrats, Yates objects to the president’s executive order. Fair enough. But she is not a political operative, she was a Justice Department official — the highest such official. If her opposition to the president’s policy was as deeply held as she says, her choice was clear: enforce the president’s policy or quit. Instead, she chose insubordination: Knowing she would be out the moment Senator Sessions is confirmed, she announced on Monday night that the Justice Department would not enforce the president’s order.