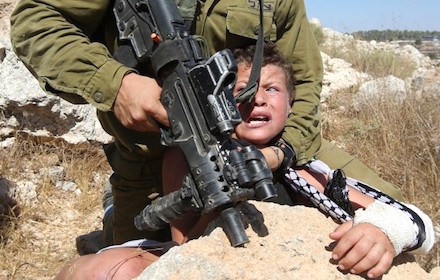 VB is a Palestinian university student. He chastises Westerners for not
stopping our governments' support for Israel's brutal occupation.
VB doesn't realize how powerless we are.
While far more comfortable, ours is a more subtle occupation
but still an occupation, ultimately by the same clique.
Also by VB: A Young Palestinian Speaks Out on Nakba Day

I was about six years old when the Israelis broke into our house with rifles and guns. I remember that morning. I had been frightened by a nearby building being demolished by tanks, or missiles, but I really don't know.

What did I know as a kid? I had a tank and a gun pointed at me but I wasn't scared, I didn't know. They took our money, kept us in a room, and searched our home. Father had saved the money for an operation...
They shot at us when my parents tried to smuggle me to school, I don't remember, but my parents do.
I am not here to give you blunt statistics and cold truths, I'll leave that to fox news, CNN, Ben Shapiro, Rebel media, Steven Crowder, Gavin McInnes, and the rest of them "truth" tellers...

Let them tell you about the terrorist Palestinians, immigrants in their own land. I am not here to give you numbers and argue with your ability to count. I am here to speak to you, you personally, as a human, not as a statistical reference. I have personally lived in Palestine all my life and no amount of statistics will change my perspective.
I have seen Israel's "Democracy" and their love for peace. I have seen the checkpoints, the soldiers, the bullets on the floor. This is my land... and I have been deprived of it. It doesn't matter what the media in the US, or Canada or Europe or Russia or anywhere says. 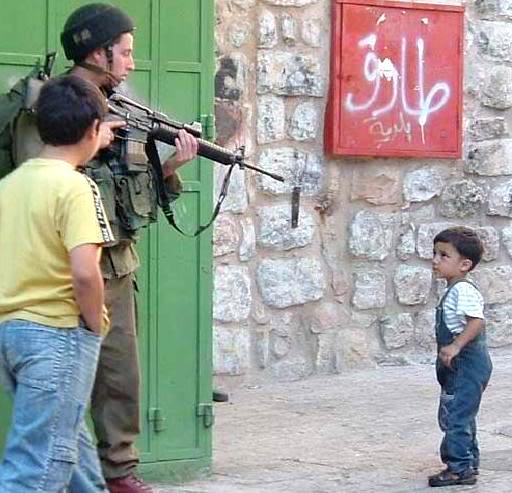 There must be something we do fundamentally wrong if we finance death and terror without knowing or wanting that. There must be something fundamentally wrong if our countries kill and pillage yet we do nothing. Perhaps all those posters, articles, tweets and posts are not enough to stop the killing machine we have "elected".
If the people of the west have elected governments that were supposed to bring peace and harmony but have failed, then I see that it is the western people's responsibility to take down those governments before they destroy any more "third world countries".
I believe that if the western people do not remove the governments that are funding Israel and other terrorist organizations as well as those governments that are depleting the resources of weaker countries and funding civil war, then these westerns are no different from their governments.
It is always difficult to do the right thing, this is why it is the right thing to do. I mean no disrespect but you need to take out your corrupt leaders because they hurt not only you, but us as well. A good man is not that which knows what to do, but the one that "simply" does.
--- 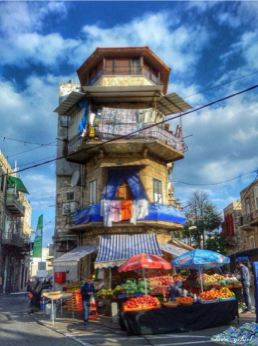 Palestinian Dreamer Awakes to Oppressive Reality
Waking up in the morning, I left the warm comfort of my bed to open the shutters of my window. Birds were singing and children were playing in our nice neighborhood. Trees, grass, bushes, parks and benches all around. The streets were clean, the roads were wide and nice. It was a beautiful spring morning like every spring morning we had.
I took the children and my wife in our car to Haifa; boy was it beautiful. The sea, the shore, the people. We had a nice lunch in a restaurant at the sea, fish, shrimps and all sorts of sea delights. We had to hurry because we wanted to see Bethlehem as well, I wanted to show the children all the nice places, the old buildings, the mosques, the churches, everything...
After a calm night in a Bethlehem cozy hotel, we headed to Jerusalem. The old city... a wondrous place. We prayed at the mosque and strolled around for a while before heading to our Christian friends, they had prepared us a nice lunch. We enjoyed their company just as much as they enjoyed ours. "Good bye! Allah protect you!" was the last thing we heard as we were leaving their pleasant company.
We headed back to Hebron since I had work next day and I had to take a good rest... The sound of the alarm woke me up, except this time I wasn't eager to get up. I turned off the alarm, opened the windows and the shutters to our "nice in comparison" neighborhood.
The cold cement buildings were all too close, no privacy, let alone seclusion. I had to get ready quickly for work... As I left the house I walked through the tunnels of our neighborhood, not as cozy as in that dream of mine.
The bachelor life is certainly difficult, not that I have a choice with my low salary. As I sat in the bus I noticed a young man, he was there by the bus door, counting the money in his hand... doesn't seem he has enough... well you won't be taking this ride buddy. As we approached our political and economic capital Ramallah, I couldn't help but notice the guy on the pavement selling books and toys... how did he manage?
I also overheard two young guys sitting next to each other in the bus talking about their simple, but difficult lives, "There are no jobs in this city, I know I am gonna graduate college but won't find a job!" "Well you should have listened to me, go work in one of the Israeli settlements, they give Arabs a permit sometimes." "They haven't given me a permit to go to Jerusalem since forever, you think they will give me one now??!!".
It was the day before Eid El-Adha, the second Muslim holiday. I saw a woman at the corner buying her kids cheap clothes for two dollars, they were getting ready for the "celebrations". I finally got off the bus. People were trying to look cheerful, but sorrow was in the air. Of course, another Palestinian killed yesterday, a whole bunch kidnapped today, early in the morning. I walked towards my destination, slowly, thinking. When will it be my turn to be mentioned on the radio?

Comments for "A Young Palestinian's Dream "

It should be remembered that most of the foreign money donated from foreign countries to the Palestinians is lost due to corruption. If someone protests enough...then that person in Palestinian controlled territory might perhaps receive a knock on the door. For instance last decade I read that the Palestinians publicly executed a few who sold land to Israelis. This received some international news coverage. And what of the hothouses in the West Bank that Bill Gates bought for Palestine during transfer of Israeli land? Did jobs get created? Did Palestine GDP go up? No. The hothouses got looted. Last I heard they are not in operation any longer.

One thing I find disgusting is how Christians are treated in Palestine. Pay the special Islamic tax or else....the Israelis don't do that at least.

With respect to VB, Palestinians are not ready to govern themselves competently. Perhaps that is the plan of the Globalists all along.

It is theorized by Barry Chamish and other conspiracists that the Palestinians are meant to be destroyed at a future time. I do not know, but certainly the other Arab nations remember the Palestinians as trouble makers over the decades with the PLO and others besides. If it looks like a major regional war is about to break out near you I would suggest that you consider leaving for somewhere safer.

Dear Imran, I can agree with you that the Palestinian so called authority is corrupt, and trust me, no one is suffering from this more than us, the normal Palestinians. We get donations and foreign help, but we honestly never know where it goes. We have rich people stealing money and running away to live in Europe or USA or I don't know where. We have people receiving a wage from the government and no one is really sure whether they work or not. About the Christians, I don't know of any tax imposed solely on Christians in Palestinian, there is non actually. The Christians celebrate their holidays freely with the Muslims and everyone gets along fine, there was never a single conflict based on religion.

When Omar Bin Khatab liberated Jerusalem he gave an oath to all those who lived there. When Salah El Deen liberated Jerusalem, he showed mercy to those crusaders who have surrendered. The keys to the main church in Jerusalem are stilled owned by a Muslim family who open then church everyday. As for a growing conflict and tension, we know of that. We are worthy enough to govern ourselves, its the occupation and the corrupt government that keeps us from that. About leaving, no, I do not intend to leave. I don't know if you read my previous article, but there I mentioned that scholars have deciphered some verses in the holy Quran which point to 2022, the year Jerusalem will be liberated for a third and last time. What is remarkable, is that the Quran has already predicted Omar Bin Khatab's victory as well as Salah El Deen's with 100% accuracy. A scholar had already predicted Salah El Deen's victory before it happened, his name was Ibin Barajan.

Wait, was this guy talking about Israel/Palestine or the USA?

Wait, does he think it's better here? I have sympathy but I don't like it when people are naive about the west. Come here buddy, see how much $ you make and how much rights you have. pffff

It is truly sad that we have allowed such an injustice to continue as world citizens and in this day and age. This is truly a time of calamity in many places and in the face of overwhelming military force many feel powerless. We can hold our hands up first and ask for help from the true power the Creator and not creation.

People of empathy, the world over, will always wish to alleviate the oppression wherever it is. Many are currently trying to help with movements such as the BDS movement and other initiatives to bypass the iron fists of unjust authority.