Up against millions of US “gay” dollars and overwhelming support by politicians, media, business, and liberal elite.

This Friday, May 22, Ireland is holding a national vote on whether to legalize “gay marriage” in that country. If this passes, it would be the first country in the world to redefine marriage by popular vote.

Ireland has never before seen anything like this. The homosexual lobby from the US has poured millions of dollars into this and has helped organize massive lobbying, media, and business political pressure. The force behind this campaign and its intimidation against opponents are enormous.

Despite the massive propaganda and intimidation campaign, a surprising number of regular people aren't buying it. [Photo: Independent.IE] 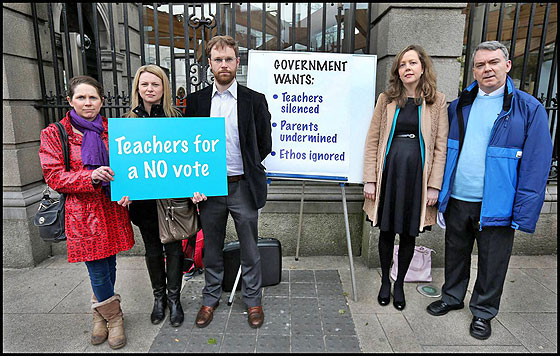 At the same time, financial support for the pro-family counter-push has been virtually non-existent. But there is a strong grassroots undercurrent against it. MassResistance has been working with activists to help them educate the Irish voters about the true consequences of “gay marriage” in society.

POSTCARD distributed to nearly 55,000 households in Ireland. MassResistance video is mentioned on both sides. See larger version of postcard HERE. 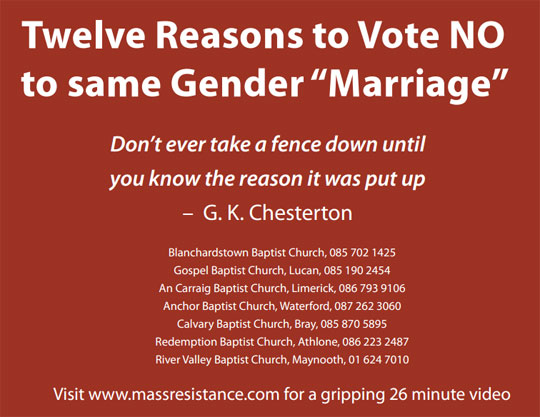 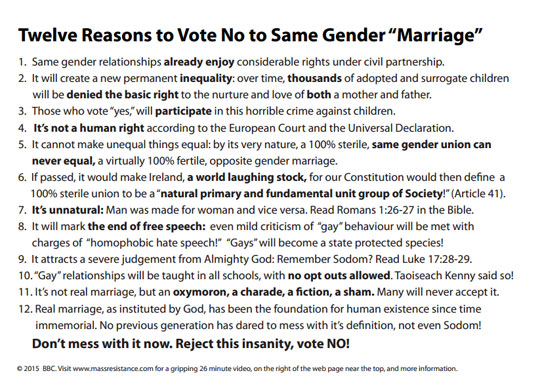 Over the past few months MassResistance has been working with a number of Irish pro-marriage activists. Most recently, we have been corresponding with activist Derry O’Sullivan in Dublin. Late last night he sent us some descriptions of what’s been happening on the ground over in Ireland.  We asked him for a report, which we quote from below.

One of the primary tools from MassResistance for Irish voters has been our video, “What gay marriage did to Massachusetts” – which has been used by pro-marriage activists from Australia and Hong Kong to Finland and Africa.

Among other things, nearly 55,000 postcards urging people to watch the MassResistance video have been distributed across the country. (It’s making an impression -- we’ve gotten angry emails from homosexual activists!)

We not only sent copies of our booklet, “What same-sex ‘marriage’ has done to Massachusetts” to Irish activists, but we sent them the master files so they could print out unlimited copies themselves.

Also, groups like the Catholic Action League of Massachusetts (which we work with) have appealed to voters in Ireland with their own information.

The “gay marriage” movement in Ireland would be nowhere without massive funding from the United States. As Derry told us:  “The injection of many millions of dollars from the USA – estimated by some at up to $25 million - over the past few years has prepared for this day.”

In particular, a massive amount of American money has been sent into Ireland to push “gay marriage” by a billion-dollar foundation called Atlantic Philanthropies. Funneling the money through key Irish LGBT organizations, it has had an enormous impact on politicians, the media, and the entire public sphere.

Atlantic Philanthropies' recent report on their push in LGBT Ireland describes how they’ve super-charged the once-unsophisticated Irish LGBT group GLEN to carry out the mission:

[GLEN’s] multi-year grant from Atlantic enabled them to ramp up their work into a full-time, highly professionalised lobbying machine. It works ‘inside’ the machinery of government where it uses a ‘principled pragmatist’ model in which it consolidates support, wins over the doubtful and pacifies those who are opposed.

Not surprisingly, most of the Irish media ignores the huge money from the US. So the reporting falls on opinion columnists. As a columnist in the Irish Times observed,

“Groupthink has been exalted to an Irish sacrament. While journalists were targeting tiny bootstrap conservative organisations and accusing them of being American-funded, GLEN, the most successful lobby group in Irish history, was swimming in greenbacks.”

A columnist for the Irish news site Independent.IE calls it ". . . a massive and sustained intrusion in Irish political and social life with almost unlimited funds."

Large US multinational corporations are also pushing the agenda to Irish voters. As Austin Ruse of C-FAM here in the US observed:

"It’s not just Big Gay American Money going to fool and even threaten the Irish people, it is also despicable American corporations who are saying a “no” vote will harm the Irish economy, including Twitter, which hardly has a presence in Ireland at all. According to the American “Irish Central” website, “A ‘No’ vote in the marriage equality referendum could have negative consequences for investment in Ireland.”

Getting the political establishment on board, especially in a country like Ireland, was necessary. Derry says this effort was proceeded by a flood of propaganda:

The Irish public had been at the receiving end of a constant deluge of LGBT propaganda for several years, and this has greatly intensified over the past weeks in an orchestrated campaign. Just one example: Large numbers of celebrities have come out in favour of the proposed amendment, and the media is full of emotional stories among the lines of “I want my gay brother/son to be happy and be able to marry like his siblings.”

Then came the organizing and intense lobbying. It all paid off spectacularly.  The pro-gay marriage groupthink now has a choke-hold on virtually the entire political establishment. As Derry says, it’s had a particularly chilling effect on the politicals:

This is a true David vs Goliath conflict. The media are 100% in favour of a “yes” vote. The politicians are virtually 100% in favour of a “yes” vote. Of 166 members of parliament only a handful are opening opposing this proposal. It has been reported that just 6 members of parliament (between both houses) have indicated that they will vote no. The others who are quietly against, are scared of being kicked out of their political parties into electoral oblivion. There is NO political partly opposing this drastic change.

But as Derry describes, the political establishment is doing unheard of things:

Even the national police force (Gardaí) has been employed in favour of the “yes” side by (among other things) giving students an easier path to voter registration than the general population.

Young people are 95% in favour of the proposal, whereas older people are the other way. One-stop voter registration desks were set up in Colleges, whereas the rest of the population had two or three stops to make. The same tables were laden with “vote yes” leaflets with backdrops of “yes” posters. This along with the input of trade unions, and professional organisations, the media, etc. has seriously skewed the democratic process.

It goes on and on. According news reports, a Senator on the "No" side vote of the Marriage Referendum debate has claimed that agencies who receive State funding are being pressured into supporting a Yes vote.

No one in Ireland can recall the kind of widespread harassment and intimidation that’s taking place over this issue. This is the most frightening of all, says Derry:

The “yes” campaign has been marked by a great deal of aggression and verbal abuse directed toward the “no” side. Many people are afraid to declare openly that they’re going to vote “no.” There is a tradition here of putting up political posters before elections and referenda. “No” posters have been extensively removed and defaced, and are hugely outnumbered by the well-funded “yes” side posters.

The Spectator, a conservative journal, puts it more bluntly

Even the Psychological Society of Ireland has gotten into the act. The organization is warning Irish citizens that any academic claim that same-sex parenting or parenting by transgender parents is less beneficial to children than parenting by normal parents is “outdated” and that such information “has the potential to impact detrimentally on people.” They are bringing Orwell to a new level, that’s for sure.

Irish pro-family groups Fighting back: rising to the occasion

The good news is that despite everything, pro-family groups are rising to the occasion. As Derry tells us:

On the “no” side, a variety of organisations have sprung up virtually overnight as the impact of the proposal dawned on many ordinary people. These include http://mothersandfathersmatter.org, http://keepmarriage.org, and others. In addition, the longer established Roman Catholic organisation, The Iona Institute (http://ionainstitute.ie) has very ably taken on the media, and has done a good job in the many debates on TV and radio. Large numbers of church groups have been very active in publishing and distributing “no” literature.

This has mobilised grass root people who have never before been involved in political issues. Many ordinary people feel hugely let down by the politicians. They face a gargantuan task, but the government has been previously defeated on previous proposed constitutional changes, so it’s possible again.

How will the vote go?

As we write this, the polls in Ireland are over 70% in favor of  the “Yes” side. But as Austin Ruse of C-FAM says.

It is not a bit surprising that polls have gone this way. After all, we live in an age where the wrong answer on faux marriage can cost you your job or your business. Why would anyone tell an utter stranger on the phone that they oppose faux marriage? It is surprising that anyone does.

So, even 78 percent poll results in Ireland do not surprise, or even particularly worry because something happens in the privacy of that voting booth. In there, people are free from gay coercion, free to consider what marriage really is, free to consider that children really do need a mother and a father and that two men can never be a mother and two women can never provide a father, free to vote 'no' on faux marriage.

A few days ago, we spoke to a Massachusetts activist who happened to be in Ireland for business. He told us pretty much the same thing. The polls look bad, he said, but he’s sensed a big undercurrent of pro-marriage sentiment that’s under the radar.

In about a day, we’ll see for sure. 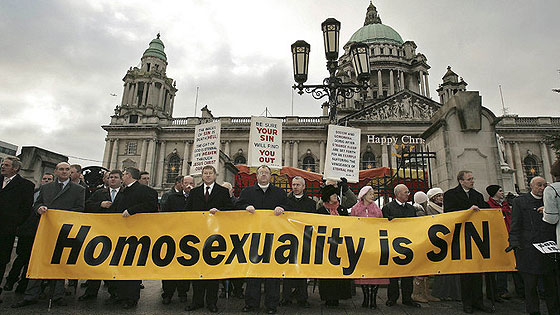 In many parts of Ireland people are much more outspoken than in the United States. [Photo: Mail & Guardian]

The Rampant Promotion of Homosexuality in Movies and Television (Nov. 26, 2011)
http://educate-yourself.org/cn/promotinghomosexuality26nov11.shtml

The Inanition Award is Given Yearly to Those Most Deverving of the Promotion of Homosexual Degeneracy and Sexual Perversion (March 2014)
http://welweb.org/inanity/inanity.htm